When, how and by whom was sport climbing invented?

One little thing that I understand differently: Sport climbing did not evolve from trad climbing (at least not in the modern sense), but more of artificial climbing. Using gear for advancement not only protection was the standard and the revolution was to ditch that and climb on "unclimbable" difficulties by using bolts as protection, which allows to fall (which wasn't an option before).

on my answer here got me thinking. What exactly was the first sport route in the world? When did it get bolted, why and by who?

By sport route I mean free climbing outside with only bolts to protect falls, not aid climbing using bolts or using the odd bolt/piton here and there.

System‭
1816 reputation 180 535 222 0
Permalink History
Why does this post require moderator attention?
You might want to add some details to your flag.
Why should this post be closed?

You are accessing this answer with a direct link, so it's being shown above all other answers regardless of its score. You can return to the normal view.

As far as I know, the "change of paradigm" that led to the birth of sport climbing happened between the 70s and the 80s, and it happened separately in Europe and in the United States.

From the early 1900s to the 50s, rock climbing was mostly seen as a "tool" necessary to reach the summit of a mountain. There was no real distinction between "aid climbing" and "free climbing", too: the goal was to reach new summits and to establish new bold first ascents in the mountains, whatever the means.

Of course, there were those who advocated a purer climbing style, as for example the german Paul Preuss:

In the next few months he made the second ascents of Angelo Dibona's routes on the Croz dell'Altissimo and the Northwest Ridge of the Grossen Ödstein, making a point of not using any of the pitons left by the first ascensionists, thereby putting into practice his desire to climb as his predecessors Georg Winkler and Emil Zsigmondy had: in a pure style, meaning without any artificial aids [...]. Pitons and carabiners were just starting to be effectively adapted for use in the mountains. At first they were just used for protection or securing a rappel line, but then increasingly became used for upward progress, for instance as hand or footholds, or to secure the rope for a pendulum or tension traverse. To Preuss this was nothing less than cheating.

Preuss even wrote a series of principles to express his ethics of climbing, criticizing the use of any artificial mean (including the rope) for the progression.

However, people like Preuss were rare, and most of the alpinists in the world didn't bother about how a summit was reached, as long as it was reached.

The debate about the the ethics of climbing made a return at the end of the 60s and of the early 70s: the advances in technology and the diffusion of the expansion bolt had made possible to climb almost anything, as long as you had enough gear and patience.

The excessive use of bolts and artificial means was strongly criticzed, amongst the others, by Reinhold Messner in Italy, who wrote in 1968 the famous article The murder of the impossible and by Royal Robbins in the USA, which described his ideas in the book Advanced rockcraft (1973).

Adventure and boldness were still considered prominent in rock climbing, and not much stress was put on technical difficulty. Therefore, using too many artificial means was seen as a betrayal of all climbing was about.

Things started to change in the late 70s/ early 80s. In some circles attention began to shift from the heroism of climbing to the technical difficulty. An important step in this process was the invention of modern rubber-soled climbing shoes in the early 80s. 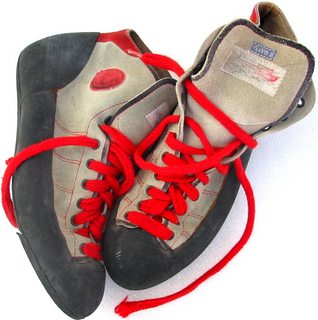 In Europe, one of the birthplaces of free climbing was the Gorges du Verdon:

But the Verdon is perhaps best known as a climbing destination—and one of the birthplaces of sport climbing, a genre defined by the use of bolts, drilled into the rock, to protect climbers. By the mid-1980s, the Verdon was the world’s first prominent climbing area to feature, almost entirely, all-bolted routes.

-Exploring the Birthplace of Sport Climbing in Europe’s Grandest Canyon

I don't know much about the birth of sport climbing in the USA, but this article identifies Smith Rock as one of the birthplaces of this activity:

A 1982 Climbing article mentioned Smith’s shift from aid climbing to free climbing, but the most significant changes had just begun. [...] “We were pushing each other, and once we had done all the existing climbs, we had to find something else to do,” he explains. “There weren’t many cracks left, but there were so many beautiful faces and arêtes.”

The problem was lack of protection, and rather than run it out, Watts began experimenting with rappelling down potential climbs, cleaning loose rock, and hand-drilling a few protection bolts. “It was a big shift, putting up the bolts and making the routes as hard as we possibly could,” says Watts. “We were just trying to raise the standard.” Unlike places like Yosemite Valley and Joshua Tree, where rap bolting had a stigma that led to controversy and even violence, sport climbing was quickly accepted at Smith, mainly because of the area’s isolation. By the mid-1980s, there were dozens of 5.12 and 5.13 routes at Smith, including many that remain popular classics today.

Another important event that marks the birth of sport climbing is the first climbing competition: Sportroccia, in 1985 at Bardonecchia, Italy. The competition took place on real rock, and not on artificial walls like modern competitions. 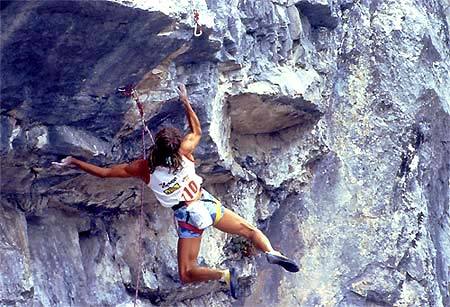 Sport climbing—today’s most popular form of roped climbing—was a highly controversial practice during its early inception in the 1980s. During this time, sport climbing pioneers such as Alan Watts scoured the walls of Oregon’s Smith Rock State Park to find lines that could be established using bolts drilled into crack-less rock faces.

valerio‭
79 reputation 3 5 9 0
Permalink History
Why does this post require moderator attention?
You might want to add some details to your flag.

According to what I can find on Wikipedia and elsewhere, it looks like it was in the 1880s. Before that, bolts had been used as climbing aids.

Best candidate for first climber and route is W.P. Haskett Smith up the Napes Needle in the Lake District in 1886, however most climbers that used artificial aids used them to climb, not just for safety until into the 1920s.

roryalsop‭
786 reputation 7 248 80 0
Permalink History
Why does this post require moderator attention?
You might want to add some details to your flag.