What knot was used by my mountain guide to tie me in to the middle of a rope?

Twice now I have been out winter hiking with a guide and another person and I'm trying to work out what knot they used to tie the middle person onto the rope.

Let's say the guide is in front, my companion is at the back tied in with standard double figure 8, and I'm in the middle, tied in with a bight. I'll list the things I know and hopefully someone can work out what the knot was:

In case it helps the first guide was Italian from the Dolomites/Alps, the second was Scottish. Pretty sure it was the same knot.

Final question would be why not just a re-threaded figure 8 on the bight as you would use at the end of a rope, except it would have 4 strands instead of 2?

Edit: trawled through some old photos and found a picture! 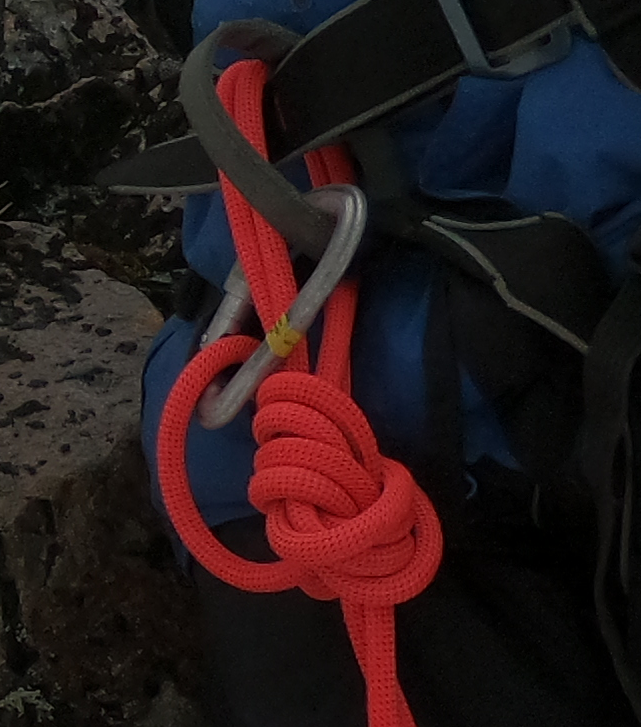 tonicsoft‭
1 reputation 1 0 0 0
Permalink History
Why does this post require moderator attention?
You might want to add some details to your flag.
Why should this post be closed?

Your guide probably tied you in with stacked OverHand Knots with the bight. Instead of re-threading the OH, the bight is pushed completely through the middle of the OH. Another OH is then tied around both standing parts, followed by clipping the bight to your harness as a security backup. It's a cleaner and less bulky affair than the re-threaded version and also easier to manage the tying process. But, you said it was a very bulky knot.

alpineer‭
1 reputation 0 1 0 0
Permalink History
Why does this post require moderator attention?
You might want to add some details to your flag.

Final question would be why not just a re-threaded figure 8 as you would use at the end of a rope?

Lets start with this. This would be a nightmare to tie as you would have to pull a lot of rope through the knot to tie it. this extra work would have limited advantages. As for the photo, the knot looks like a re-threaded overhand on a bight. The running end (bight) is then clipped into the biner to prevent the knot from coming untied. This seems like the perfect knot for this situation.

In a non-guiding situation, you typically tie into the middle of the rope with an alpine butterfly. The advantages of the alpine butterfly is it can be loaded from either direction, is a clean knot that unties pretty easily, and because you are attached with a biner can be escaped from quickly. In a guiding situation, none of this matters. The knot is only going to be loaded from one direction since guides cannot fall. There is little chance you will accidentally untie the knot compared to a biner opening (accidental or intentional). Finally, your description makes it sound like you were doing low angle snow/ice with no crevasses so the chance of loading the rope in a forceful manner where the strength of the knot matters is essentially zero.

StrongBad‭
436 reputation 26 120 50 0
Permalink History
Why does this post require moderator attention?
You might want to add some details to your flag.

The knot looks like a rethreaded overhand tied on a bight. Call it a rethreaded EDK if you like. So the response of "it's an unusual knot" is entirely reasonable, it's not on the list. The end loop has been clipped into the carabiner, that will act in the place of a stopper knot.

It sounds like you're hiking/scrambling on dangerous ground rather than climbing, so the reason for using this knot is it's quick, simple, and good enough for purpose.

A figure 8 tied the same way would be a remarkably bulky knot and not really gain you anything. A figure 8 is easier to untie after loading, but in this case you've got 4 strands at every point and less load so you don't need to worry about that aspect.

Separatrix‭
351 reputation 0 79 35 0
Permalink History
Why does this post require moderator attention?
You might want to add some details to your flag.