Cycling in Ontario &#x2014; do I need to worry about permission to access logging roads?

In Sweden, I've cycled a lot of logging roads. But Sweden has the Right to Roam and it doesn't really matter who owns the land. When cycling on logging roads in Ontario, is any permission or permit required? If so, from whom would I obtain the permit?

Suppose one plans a cycling trip through Northern Ontario. Would a route such as this one — can I assume that roads that are on Google Maps as well as topographic maps are accessible by bicycle, or do I need to plan in advance for every non-provincial road along the route if I am allowed to go there?

gerrit‭
661 reputation 136 94 100 0
Permalink History
Why does this post require moderator attention?
You might want to add some details to your flag.
Why should this post be closed?

I can't answer for Ontario or that route specifically, but only give you a general idea how private property and trespassing works in the US and Canada.

You are right in that we don't have Allemansrecht here, and you have to be aware of that. Legally, in many places you are allowed to walk or ride a bike on a established path as long as there is no phyisical barrier or something like a "No Trespassing" sign. This isn't universally true, and the details can vary by jurisdiction. The only way to know for sure is to ask, but this is a reasonable rule to follow if you don't know anything more specific. If you follow this rule, at worst you may be told to leave. I really don't see anyone getting arrested or fined for trespassing when they got there via a established route with no indication they weren't supposed to be there.

A physical barrier could be a fence, or a gate or chain across the road. But context also matters. If you see a dirt road that goes into a farm field and ends at a house, clearly that's a driveway and you shouldn't be there unless you have business with the people in the house. It would be inappropriate to ride your bike up the driveway just to ride the bike when there are reasonable hints it's a private driveway.

Signs are more clear and explicit. Not all signs are there to keep everyone out. Read any such sign carefully. The basic "No Trespassing" is clear. Don't go there. Sometimes you see "Private property" or "Private driveway". That generally means don't go there unless you have business with the owner or have previous permission from the owner. Other signs just disallow particular uses, like hunting, motorized vehicles, horses, etc. Hiking and biking are usually the least restricted activities. There are many old roads and paths were it's fine to hike or bike, but motorized dirt bikes and the like are not wanted.

Tranveling along a path and camping overnight are two very different things. Generally, unless you know its OK to camp, it's not. Where it's OK varies considerably across North America. In the densly populated east, like here in New England, you're basically not allowed to camp anywhere it doesn't say so or you find explicit permission listed someplace authorotative, like the web site of a National Forest if you are in that National Forest. In practise, stealth camping and being careful to not hurt anything and leaving minimal trace is a viable option in many places, but be aware that you may get fined or arrested if caught. The less you are in anyone's way or affecting the area around you, the less anyone will likely care. Still, that doesn't make it legal, so there is always some risk when you don't have explicit permission.

No, you can't assume you are allowed to bike on a back country road just because it appears on Google Maps, OpenStreetMap, etc. When you get there, you may find a gate across the road and/or a "No Trespassing" sign.

As for logging roads on land owned by the lumber company, that can vary. Most will probably have a No Trespassing sign at the entrance just to cover their butt legally. If someone gets hurt due to a large pothole, broken bridge, etc, then the logging company has a good legal case by saying that person wasn't allowed to be there in the first place.

Some logging companies require you to get a permit, mostly so that they can make you sign a release acknoledging various hazards and absolving them of any responsibility. They may charge a fee for that to cover the cost of having to process the permit. You really need to contact the logging company ahead of time. Chances are they don't really care that you're there, just want to make sure you can't sue them if you get hurt.

Also watch out for the logging trucks. They own the road, literally, and often drive that way. They will come barrelling around a corner without consideration of a bicycle possibly being there. When you hear one coming, make sure to be off towards the side of the road and out of their way.

The answer is usually no, but there may be some restrictions depending on exactly where you're going.

Most logging roads are on crown land. The use of forest roads is managed through road abandonment, road decommissioning (making it impassable) and road access controls (i.e. signage, gates, etc.). In Ontario, public access to Crown land is restricted for a variety of purposes depending on the location and the priority of land use values in those areas. Restrictions to Crown land access are often used to protect the remoteness of an area for resourcebased tourism, for fish and wildlife management, for species-at-risk protection (i.e. woodland caribou), as well as due to liability concerns and budgetary restraints.1

The Ontario Ministry of Natural Resources and Forestry provides an online crown land use policy atlas. So you can go online and see what the policy is for whatever land you plan on going on. 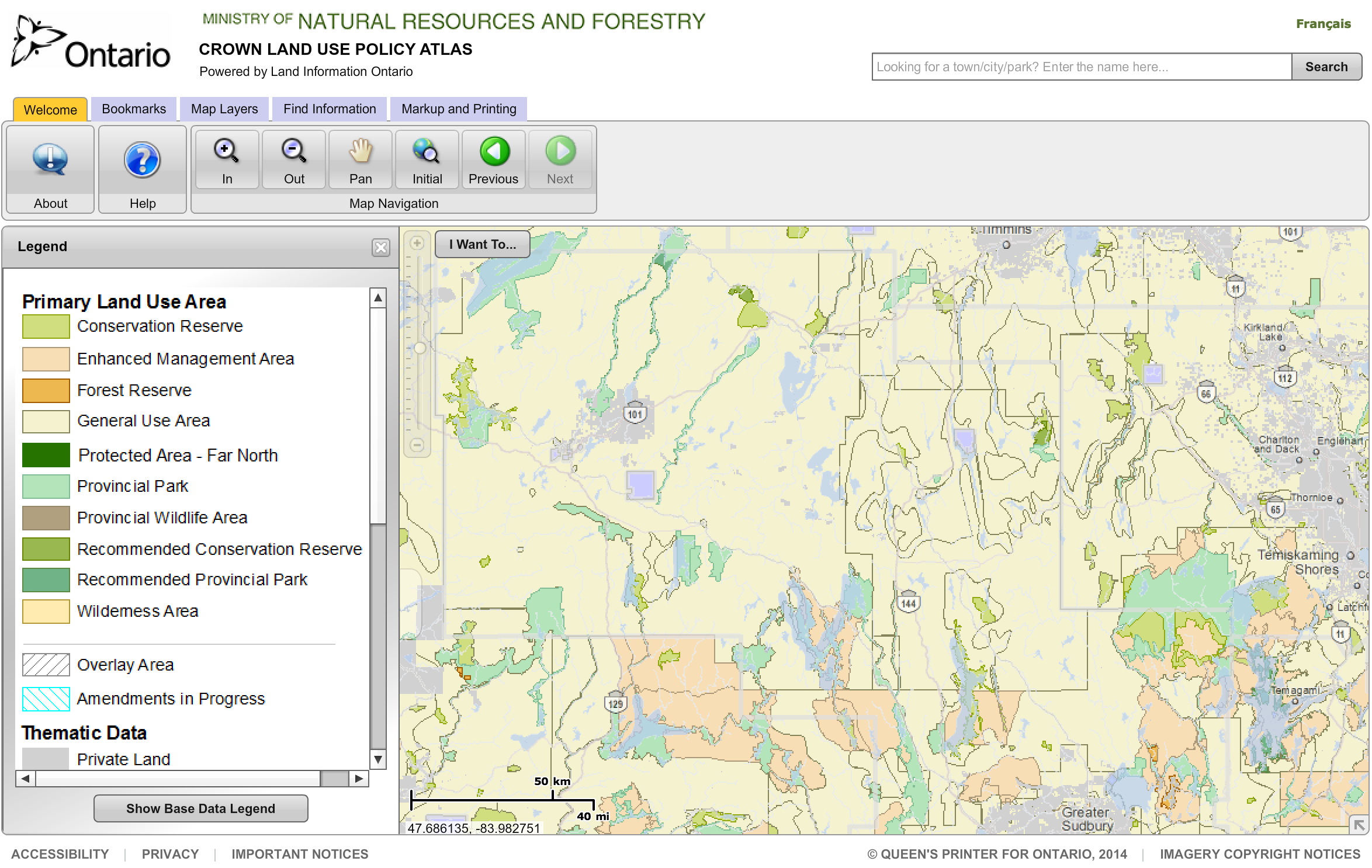 ShemSeger‭
1679 reputation 82 481 184 0
Permalink History
Why does this post require moderator attention?
You might want to add some details to your flag.