Does a bird really abandon the nest? Will similar birds re-use it?

This may appear a bit opinion-based.

Birds take a while and a lot of effort to build a nest. Is it okay to take that pretty nest as a sample or a show-piece to put in a personal balcony or a garden? I don't know if they or the same kind of bird re-use it. Basically, I have seen birds abandoning the nest after they are done with it.

For example, there is bird called the Baya weaver, which has a beautiful nest. See the pic below. I have seen plenty of them, haven't studied them at all. 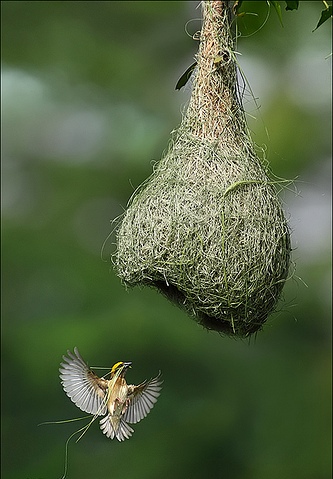 WedaPashi‭
706 reputation 150 137 107 0
Permalink History
Why does this post require moderator attention?
You might want to add some details to your flag.
Why should this post be closed?

Some species reuse abandoned nests. According to the Bird Nests and Eggs field guide, great horned owls reuse abandoned raptor nests, and elf owls nest in abandoned woodpecker holes. This is far from a complete list of species that reuse nests; this is just two I remembered off the top of my head and could find a reference for.

Kevin Krumwiede‭
36 reputation 1 6 4 0
Permalink History
Why does this post require moderator attention?
You might want to add some details to your flag.

Birds do not typically reuse nests, as pests and parasites typically move in and use it as a habitat after the birds are done with it. Those birds who do reuse nests often don't have much success raising healthy chicks, because of said parasites. Also, predators have a much easier time finding food in nests that have been around for a while vs. having to find new nests.

Birds will build their nests in the same spots though. I have Robins that build under our deck pretty much every year, but they only come back if I get rid of the old nest first.

ShemSeger‭
1679 reputation 82 481 184 0
Permalink History
Why does this post require moderator attention?
You might want to add some details to your flag.

Most bird nests are protected under the Migratory Bird Treaty Act (MBTA). This law says:

“No person may take (kill), possess, import, export, transport, sell, purchase, barter, or offer for sale, any migratory bird, or the parts, nests, or eggs of such bird except as may be permitted under the terms of a valid permit...”

Under the MBTA it is illegal to destroy a nest that has eggs or chicks in it or if there are young birds that are still dependent on the nest for survival. It is also illegal for anyone to keep a nest they take out of a tree or find on the ground unless they have a permit issued by the U.S. Fish and Wildlife Service (USFWS).

Natalie‭
1 reputation 0 1 0 0
Permalink History
Why does this post require moderator attention?
You might want to add some details to your flag.

Is it okay to take that pretty nest as a sample or a show-piece to put in a personal balcony or a garden?

This can be a simple question of size. A large nest, like an eagle's nest, is of course too impractical to take away! but, a really small nest is generally built in a season. Birds are used to that. The smaller the nest, the more really good places there will be to build it, from the bird's point of view... unless nest-building habitat is really scarce, in which case, leave it! to be used or ruined or re-used as 'nature' would have it.

Also very important: if it is a protected or endangered species' nest, you shouldn't even go near it, much less take it away with you. As an example, California Condors tend to be very easily 'spooked' off the nest when brooding eggs or young... which can lead to loss of the chick or viable egg.

And also important: for some species, if it is not a highly-constructed nest like that of a typical songbird, which nest is woven together or otherwise wholly made-on-site, the nest can be very scarce as resources go. Cavity nest sites, for instance, are re-used by many species because such cavities are both rather secure locations, and are also scarce or in short supply - or, require extensive labor to chisel and hollow out.
Another point is, some species have only hollow stubs to nest in - and, for some, the supply of (suitably sited) hollow stubs, or stubs of trees that could be hollowed out with some effort (but for weaker species, not too much i.e. partially rotted softened wood) ... is quite scarce, and a drastic limiter to that species' continued abundance. I think the American Wood Duck is a good example of this. They could be more abundant if there were more completely undisturbed (they are very shy and nervous as a consequence of being nearly exterminated/extincted by overhunting etc.) suitable stubs of softened wood near suitable bodies of water... but such rotted wood is eliminated by forestry practices etc.

Leave rare/endangered/shy species' nests alone and untouched... you could be doing them a great favor, and/or saving yourself from a punitive visit from a Warden or police.

And leave stubs and hollowed-out nests where they are.

And don't take anything large, of course!

R. Hess‭
1 reputation 0 1 0 0
Permalink History
Why does this post require moderator attention?
You might want to add some details to your flag.