In recent years, my wife and I completed a few long distances hikes together, for instance:

We carried everything we needed for the entire trip (food, tent etc.) on our backs and refilled our water supplies where possible. We slept in our tent and used other shelters only in case of emergency. Thus, we were as self-contained as possible and had no problems with the more remote parts of the trips. Also, we carried no unnecessary bits and pieces.

Two years ago our daughter was born. In the first year, we though that it would not be a good idea to take her on a prolonged trip like those above. However, in the meantime she enjoys being outdoors a lot and also likes to be carried around in one of those kid carrier backpacks. Therefore, we thought that generally it could be possible to take her with us on a muti-day hike.

However, the child on one back leaves only one back free for all the rest of the stuff we need. And obviously, the equipment now also includes some diapers, a selection of toys and books, more clothes than before, an extra sleeping bag etc. Summarizing, it seems impossible to carry everything with two adults only.

We did some research and then started out this year in June to complete the West Highland Way (WHW) in Scotland (154 km from Milngavie to Fort William) together with our daughter. We chose the WHW for these reasons:

Everything worked out surprisingly well and we finished the WHW exactly as planned. Also we have the impression that our daughter also liked the experience. That was really great!

Therefore, now I am looking for other options for the future which might be feasible with a small child that cannot walk the distance itself (so it is carried at least for parts of the way). What I wonder is particularly:

Snijderfrey‭
31 reputation 2 7 3 0
Permalink History
Why does this post require moderator attention?
You might want to add some details to your flag.
Why should this post be closed?

Disclaimer: this doesn't really answer any of the specific questions other than the "anything else" one - which is why it was originally a comment. However, as @fygsin asked me to put it into an answer, here go my 2 ct:

How far do kids walk?

When I was in kindergarden (so age 3 - 6), sometimes dad would collect me to walk home ≈ 2-2.5 km after a full morning's play and before lunch and nap, or we'd collect mum at her work (≈ 5 - 6 km one way, afternoon/evening, so after nap + food). I don't recall this as special in terms of distance. Dad used to say it's less a matter of legs than of motivation at that age.

At elementary school (age 6 - 10) we had a field day hike of about 12 km mostly through open fields in the summer.

Nowadays, the local forest kindergarden (Waldkindergarten) hikes probably ≈ 3 km, has a break, then the kids roam our little wood and finally walk the 3 km back for lunch.

Conclusion would be that if motivation is fine (of course, small kids can't walk that far, that's something only big kids can...) and the kid is used to hiking throughout the year, by next year the kid is probably able to walk what you'll consider OK daily distance with 2 backpacks carrying stuff for 3. It's probably going to be much slower (and the kid probably runs twice as far for the same overall distance; "spazierenstehen") which will be more strenuous for you as well.

The forest kindergarden btw. doesn't carry toys, the kids play with stuff they find in the woods. And you may not need to carry books if you are able to invent stories to tell (or play along the way => motivation), otherwise, an e-book reader may be a lighter (but also more sensitive) alternative.

Also: who needs a book if there's a map to read? ;-)
The advantage of maps is IMHO that one can get a whole lot out of a map without the need to know a single letter (I know some kids who were fluent with maps in kindergarden age). This also offers more possibilities, e.g. having the kid the grow into the role of "navigation officer".

The fact that there live deer, fox, badger etc. the forest/thickets leads to the exciting possibility of seeing some of them. Unfortunately, hiking with a kid the chances to actually watch one are very slim. Insects, amphibians and birds are easier to spot, but mammals are usually so much more interesting.
I've heard motivation attempts like "we may see a roe deer" lots of times, but personally I cannot recommend this unless you know what you're doing and you are dedicating the trip to this goal (proper time & places, patience - which is not well compatible with camping with the kid). Otherwise, this is likely to backfire: After hearing this a couple of times without any sightings to speak of the kid may consider it a rather empty lure.

On the other hand, looking for traces or stopping when you see traces will probably work better. And depending on where you are, you may put in a zoo day at a Wildpark (game park?) where the enclosures are sufficiently spacious that it is still an adventure to spot certain animals, but you will see some: 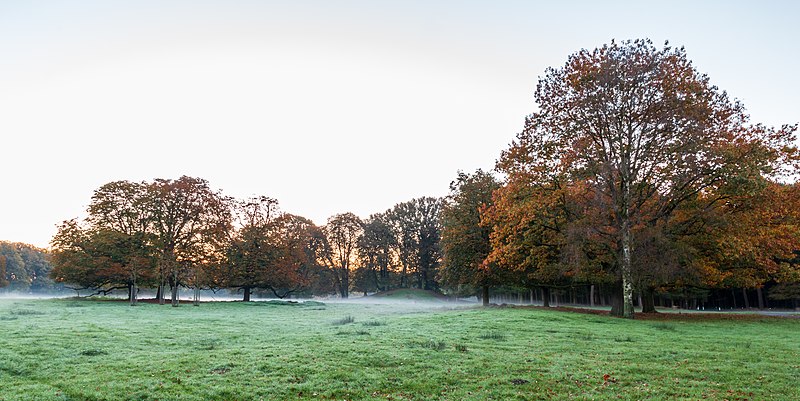 * I may be prejudiced here as I grew up with a little wood starting few m behind the house - I feel at home in woodland, but open grassland/agricultural plains are plain boring to me and after a while get on my nerves.

cbeleites supports Monica‭
241 reputation 0 52 24 0
Permalink History
Why does this post require moderator attention?
You might want to add some details to your flag.

I see a lot of ideas already.

Whenever a kid gets bored (or better: before that time), make sure it gets distracted.

For kids a long walk without much 'change' is maybe boring.

So you can try:

You also might want to start doing the above only when you see the kid is starting to get bored, not to run out of options when really needing too.

Michel Keijzers‭
151 reputation 0 35 15 0
Permalink History
Why does this post require moderator attention?
You might want to add some details to your flag.

It is not suitable for the wildest of outdoors, but an other option would be carrying some sort of trailer (I am not sure of the English word for it) which makes the luggage carrying easier. The picture below is for bikes (thus matching with @Loduwijk's answer). 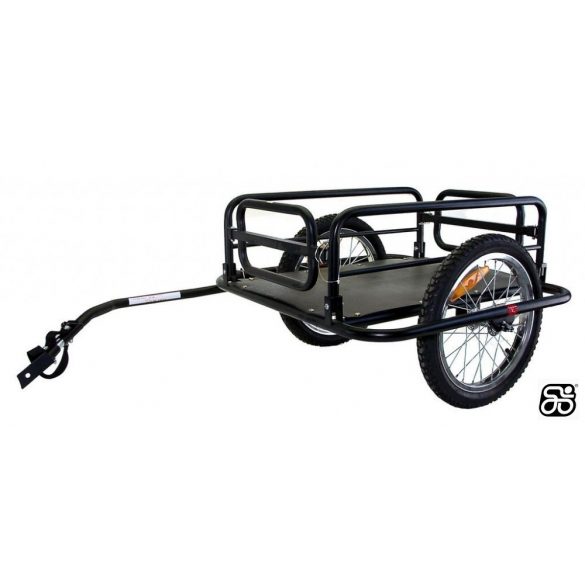 Here you can see the trolleys they use in arctic races. 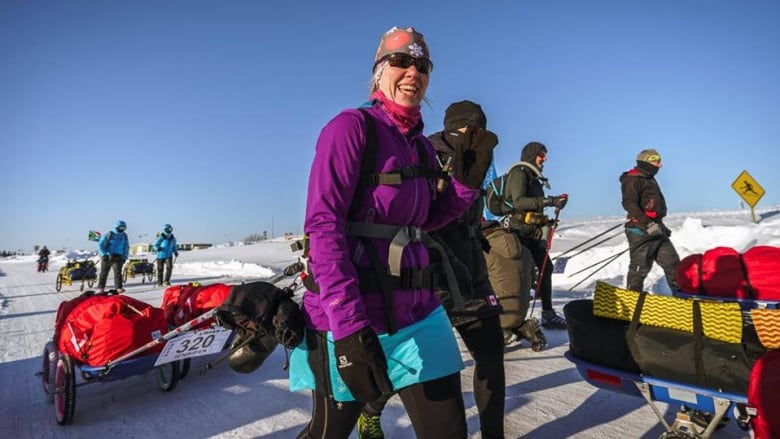 I admit that this solution works only on flat terrain with relatively wide paths.

Akabelle‭
176 reputation 4 50 20 0
Permalink History
Why does this post require moderator attention?
You might want to add some details to your flag.

My Experience With Children on a Hike

With 1 other adult and 4 children, I have done a 2-day hike. The youngest child was 3, but he complained of being tired often and was slow enough that I carried him much of the way anyway, so that aspect was similar to your infant-carrying situation.

I carried my normal pack on my back and the child on my front until I needed the child off that spot, then I wore the backpack backwards (on my front) and the child hung onto my back. I went back and forth like this several times each day.

I will admit this made the trip even more intense for me. I don't think I would want to do it for more than 2 or 3 days with a child that large. With an infant, I might push it another day or 2 further. As difficult as it was though, it made the trip rewarding in other ways, such as knowing it was a great workout.

That specific hike was the trail in the Adirondacks that goes to Cascade and Porter mountains. Unfortunately we did not summit Porter, but we did Cascade. The kids loved it so much they would randomly tell people about it even months later.

To make the porting easier, everyone who could carry something did. Even the younger children carried some, though only a few pounds. The oldest child was 10 and carried closer to 15 or 20 pounds. Between all the children, this was like having a third adult carrying a load.

The kids loved it! They have been wanting to do it again and to go farther, but we just haven't gotten around to it yet.

If you are able, I highly recommend getting lighter, smaller gear to use the weight more efficiently. This is nice to do under normal circumstances, but it is even more important when you are pushing the boundaries of what you can do. If you cook with gas, get one of the tiny camp stoves that weighs less than a pound. Get ultralight versions of items. We have no ultralight tent, so we shaved off a lot of weight when we ditched the tent and switched to using a couple of tarps, and we've tried sleeping in hammocks too which was great and also a lot lighter than the tent. Basically anything you can do to make it so that your weight is almost all food.

And make sure that most of your food is high energy. We do flatbread with peanut butter, and powdered mixes to add to our water.

For your specific situation, since you mentioned books and toys, you could try getting some ebooks on a phone to save space and weight. And for toys, I've noticed that very young children are often happy with cheap, tiny, lightweight trinkets that weigh an ounce or two. Obviously, for babies just be careful it's not a choking hazard.

Something we are looking into now is biking. With a bicycle you can cover more ground, with more people, more gear, with less energy input.

We put pegs on the back wheels of 2 of our bicycles, and the youngest 2 children love getting rides on them. Standing on pegs won't work for the baby, but there are other options such as attachable infant seats and bicycle cargo trailers.

Some hiking trails also allow biking. You could check the trails you want to use for this.

If you don't want to ride a bicycle, then the bike could still be used purely for carrying the load and you could walk next to it wheeling it along with you. I have done this to carry larger loads than I could carry normally.

The dynamics of bike riding, or even just walking a cargo-laden bike next to you, are different than walking because of the wheels. This is especially the case with hills. So you need to get used to it before going on the long trip.

Loduwijk‭
276 reputation 19 45 33 0
Permalink History
Why does this post require moderator attention?
You might want to add some details to your flag.