When and where to happen upon Aurora Borealis in Vancouver, BC?

First, this Reddit post appears inaccurate. The aurora borealis is NOT directly over UBC Vancouver. Are there other better places to view it?

Anyways, why did it appear around Oct 12 2021? Climate change? A moderate geomagnetic storm — whatever this means? Can aurora borealis be predicted? What's the best time period to stumble upon it over Vancouver? 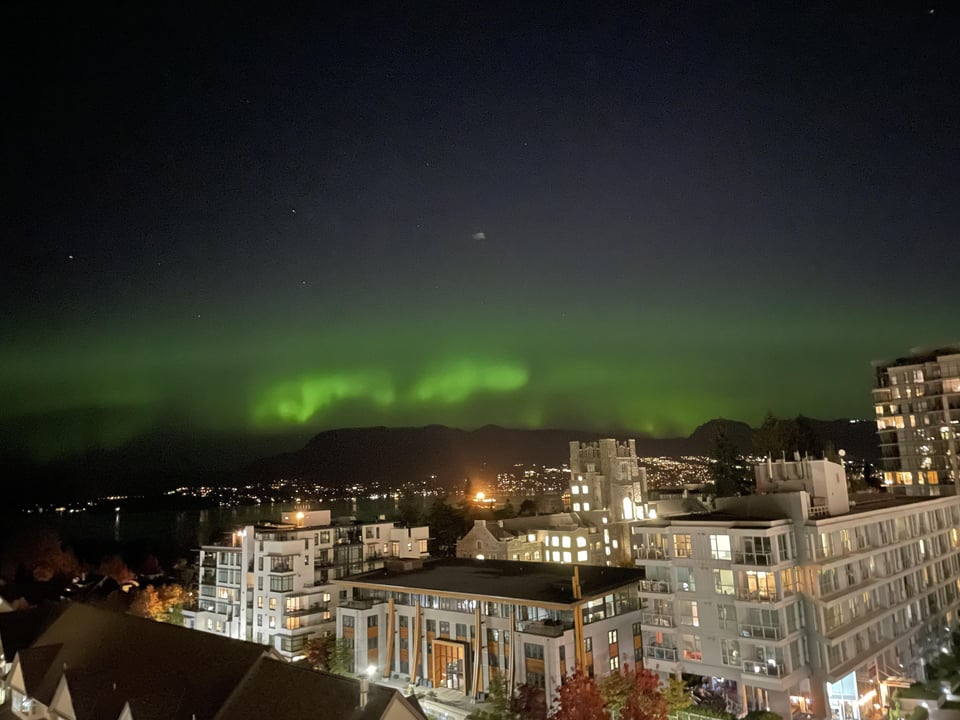 TextKit‭
-103 reputation 42 8 -106 41
Permalink History
Why does this post require moderator attention?
You might want to add some details to your flag.
Why should this post be closed?

The sun is currently in the more active part of its cycle, where solar flares and coronal mass ejections (CME) are more common.

Auroras are caused when high-energy charged particles hit the vicinity of Earth. These charged particles spiral down to earth along the magnetic field lines, which intersect the Earth's surface near the poles. An aurora results when these particles slam into the atmosphere.

Such "solar storms" that spew particles in Earth's direction have been more frequent and stronger recently, due to the phase of the sun's cycle we are in now. As a result, auroras have been more common and more visible further from the poles than usual.

For example, there was a significant CME on 28 October, which caused larger and less polar auroras a few days later. It usually takes 2-3 days for a CME to hit Earth. If auroras were seen in unusual locations on 12 Oct, then there there was probably a CME around 9-10 Oct. That should be easy enough to check.

Since auroras are caused by solar activity and have relatively little to do with conditions on Earth, there is no earthly season for them. We happen to be in the solar "season" for auroras currently. Otherwise, North America is the best place for seeing northern auroras, since the northern magnetic pole is in that direction from the rotational north pole. The north magnetic pole is usually around Baffin Island in the Canadian arctic. Therefore, auroras are visible more southerly in North America, with the opposite effect on the other side of the north pole in Asia.

Why the downvote? (1 comment)
Sign up to answer this question »
Featured
How can we grow this community?